Ok Part 1 was very detailed about our trip excursions, but I promise I’ll answer more of your RV questions at some point.

Badlands National Park: After hours and hours of flat South Dakota, all of a sudden there is this amazing terrain. Deep cavernous rock, tall boulders. It really does feel like you are on a different planet. We parked at the Visitor Center, always with an eye out for “RV Parking,” and saw a park ranger in the parking lot with a huge skull in his truck. He told us it was a bison skull they found in the wilderness area and had to hike one mile back with it. It weighed around 100 pounds!

After some bathroom breaks and water refills, we grabbed a trail map and headed back to the main trails we wanted to hike. RV Bathroom Tip: we tried not to use it. We had to get gas every 4-5 hours anyway, so most of the time we used gas station bathrooms. We hoped to only dump the tank of the toilet once. So as much as possible we did not use the RV bathroom.

At the Badlands we hiked the Door, Window and Notch trails, and a prairie dog town. The Notch trail was longer and required climbing up (and down!) this wooden ladder. The scenery was always amazing!

After hiking at the Badlands, we drove about an hour and parked at a truck stop near Mt. Rushmore. Sleeping at truck stops is hit or miss. Sometimes its calm and quiet. Other times it is loud and bright. This night was windy but we didn’t even realize that until the morning when we walked into the truck stop to use the bathroom and get breakfast, and the wind was blowing us sideways! I’m not going to lie, I was not excited about driving the RV through this wind, especially knowing we had some twisty mountain roads ahead. Thankfully we left early enough that the roads were pretty empty. Every time the wind blew me into another lane, no one else was around. Yes, the wind blew me into other lanes. I had such a tight grip on the steering wheel that my hands hurt when we arrived. I have never experienced wind like this before!

Mt. Rushmore: The trails were closed at Mt. Rushmore because of recent snow and ice, but we were still able to walk past all the state flags on the paved path. We took the obligatory pictures, marveled at the stone carving, and headed to the gift shop. I asked the park ranger about driving routes to Custer State Park, our next destination. She informed me that the RV was too big for the route I intended to take, and also that part of the highway was closed down due to overturned semi-trucks who got blown over in the wind. Yikes! We found a route, made our purchases of National Parks patches and coins, and got on the road again.

Custer State Park: Custer has a road that goes through and around the park called the Wildlife Loop. We drove half of that slowly, while checking out the bison, more prairie dogs, bighorn sheep, pronghorn antelope, and the famous begging burros who come up to your car windows looking for food. We fed the burros slices of an apple and then supplemented with crackers to keep them around longer. We tried to alternate days in the trip with hiking and rest. So after hiking at Badlands, today was more restful driving through Custer. The kids loved seeing all the wildlife. Even though we saw hundreds of bison, it was still exciting to see more bison.

We detoured off the Wildlife Loop to check out Wind Cave National Park, which had just opened up their cave tours again, however we didn’t make it in time for that. We did a short hike on top of Wind Cave and read signs explaining the history. After a short time there, we ventured on to The Mammoth Site. Basically mammoth bones were discovered and a structure was built around it so visitors could see the mammoth bones in place. It is an active dig site and people were digging while we visited. Some bones they leave in place and others they take away for more research. They have found bones representing more than 60 mammoths! It was really a unique and amazing site to see.

Are you keeping track of all we did in just a few days? So far we are only two days into the trip and we have been to Badlands NP, Mt. Rushmore NP, Custer State Park, Wind Cave NP, and The Mammoth Site. Next up: back to Custer to climb a mountain!

When Jack was two years old, we took him to Mexico for a beach + adventure trip. Sitting on a beach is my ideal vacation. But Jeff needs almost constant activity, so we had a variety of things planned that made both of us happy. And Jack was along for the ride.

Jack is asleep in this picture, hence why Jeff is stabilizing his head.

First up, swimming with whale sharks. Not quite as dangerous as it sounds, since they only eat plankton, but they are the size of school buses. When I booked the whale shark tour from home, they said no children were allowed. But since we offered to pay for him, and convinced the tour company Jack would be no problem, they agreed.

Next I asked our pediatrician what to do to avoid Jack getting seasick. He suggested a small dose of Benadryl before we get on the boat. Sounds easy enough.

We boarded the boat and the benadry knocked Jack out. He sat asleep on Jeff’s lap while the boat motored out to find some whale sharks. The idea is that once you find a whale shark, two people at a time get in the water and swim with it for a few minutes. Also, since whale sharks are wild animals and unpredictable, this all happens quickly. 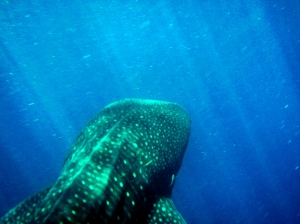 Finally we find a whale shark and Jeff and I are up first. The boat captain picks up Jack, who is still sleeping, and hands him to another female passenger. I tried to protest that Jeff and I go separately so one of us is with Jack, but the boat captain assured me Jack would be fine because “she’s a lady. She take care of baby.” Oh, that settles it. I hollered to her “his name is Jack” and jumped into the water.

Jeff and I got our three minutes with the whale shark, and got back on the boat as two other girls jumped in. Then the whale sharks were gone. You were supposed to see many of them while they’re migrating so that all the passengers had a turn to swim with them. But since they disappeared, we drove around in the boat searching for more whale sharks.

Hours passed. Then the boat ran out of gas. We are floating in the middle of the ocean. [This is a true story.] Eventually another boat pulls up and takes the passengers from our boat who hadn’t swam with the whale sharks yet. That leaves the two boat captains, two Australian girls, Jeff, Jack, and me. Floating in the ocean.

Another boat pulls up and begins towing us back to shore. By this point in the trip, Jack’s Benadryl has definitely worn off and we’ve run out of ways to entertain him on a small boat. To make it worse, the bobbing up and down over high waves mixed with the exhaust fumes of the boat towing us, is causing Jeff and I to feel seasick.

We are both laying down while half watching Jack who is eating some raisins. Nothing quite wakes you up and removes your seasickness like hearing your husband say to the toddler, “Did you just put a raisin in your nose?!”

The obedient, well-behaved child, who has never even thought of putting anything in his nose, chose this time to try it. We are being s l o w l y towed back to land, but no land is in sight at this point. We ask the captains for a first aid kit, hoping there would be some tweezers. How do you say tweezers in Spanish? They ask if we need a bandaid. Umm no.

Next the Australian girls in their 20s. One has nothing with her. The other digs around her purse and at the very bottom, where you have crumbs and old hair bands and gum wrappers, finds a paper clip. “Do you want this?”

A quick look at our circumstances reveals no better options. Jeff straightens out part of the paper clip, intending to stab the raisin. I hold Jack’s head still… although the boat is bobbing in the middle of the ocean… Jeff goes for it and thankfully we successfully remove the raisin. (Cue the choirs of angels) 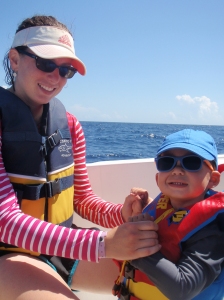 Here is an example of watching Jack closely 🙂

We certainly could have had a dire medical situation on our hands, especially considering it still took us hours to get back to shore. The rest of the boat ride is a bit of a blur. I’m pretty sure we didn’t take our eyes off of Jack and gave him no small objects. Needless to say he learned his lesson.

As for the boat running out of gas, and the tour taking twice as long as planned, I think we got a small refund. At least we had our three minutes with the whale sharks.