If you landed here somehow without reading Part 1, please go back and read Part 1. 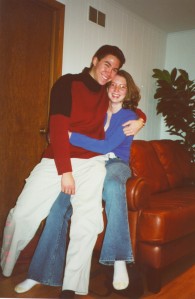 After Breakup #1, I realized I didn’t really know much about Jeff so I spent the next few months talking to him – or to be more precise, AOL Instant Messaging. In November I casually announced to my roommate “I think I love Jeff Chun.” Next thing I know my roommate and I were driving to University of Illinois on a Saturday morning to have lunch with Jeff so I could ask him out. After a few hours of working up the nerve, I finally confessed I liked him, he agreed he still liked me, and we were back together.
Then Kristin (roommate) and I got back in the car and drove back to Valpo. About 10 minutes into our drive I said, “I think I made a mistake.” Kristin spent too many hours with Jeff’s not-so-fun roommate waiting for me to talk to Jeff to let me give up this early. “Date him through Christmas break and if you’re still not sure, then breakup with him.” Ok I can do that.

Christmas break came and went and Jeff and I were

still together. We dated for two years through college with a few breakups or on-a-breaks. According to Jeff, no more than five and no less than three… I have no recollection of these. Who can blame me? This was the time of Ross and Rachel’s on-a-break in Friends.

After two years of dating in college, I broke up with Jeff one final time for good forever, never to date again (or so I thought). We had one last year of college before the real world. Jeff and I kept in touch a little and would see each other when we were home on weekends because he went to the same church as my family. Jeff may or may not have used this time to become best friends with my brother (seven years younger than us) in order to stay in my life. I moved to Wisconsin after graduation, while Jeff stayed in Chicagoland. [Editors note: Jeff Chun and Jeff my brother (yes it’s confusing) really were and still are good friends.]

Jeff never dated anyone else, but I did date a few guys. Sometimes it was hard to continue being friends with Jeff (current boyfriends aren’t usually happy about ex-boyfriends). One 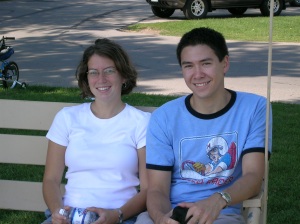 day I told Jeff I couldn’t be friends with him anymore. Little did I know that a few days earlier, Jeff felt like God told him that he should always care about me. Wow!

Finally a day came – like a lightbulb moment – when I casually announced to my roommates “If I’m going to marry anyone, it’s going to be Jeff Chun.” “Yay! I’ve been rooting for him all along!!” they rejoiced. I didn’t even know what they meant “rooting” for him because he had never been an option that they had known. But as soon as those words left my mouth I began to see the man Jeff had become in the last three years of not dating each other. He really was the one!

I promptly drove back home that weekend to talk to Jeff. Conveniently he was at my parents’ house hanging out with my brother. The three of us played yard games, Jeff and I flirting a little. I wondered if he could possibly like me again after all the times I broke his heart. I don’t remember much about our conversation except I was ready to get married and Jeff was going to make me wait. 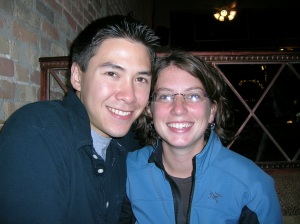 At my coffee shop: Copper Rock!

We dated long distance until I realized Jeff wasn’t going to leave his real grown-up job and move to Wisconsin where I worked part-time at a coffee shop and hung out with high schoolers. I sent three resumes, got an interview and got hired. It was a whirlwind. Clearly God was directing this move. Next thing I knew I was moving back home, literally home, with my parents and my brother who was still in high school. About 10 months, 2 weeks, and 3 days later Jeff finally proposed (but who was counting?) and another eight months and we were married.

God had his hand on us the entire time. Of course I could share more stories from those years, but I think this overview is long enough. Thanks for reading friends! 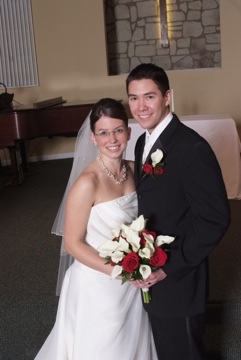 Since we just celebrated our sixth wedding anniversary, I thought I’d share our story. Even 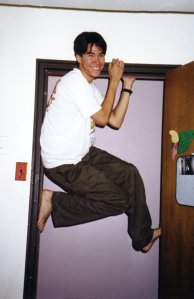 though most of you reading this are family and probably already know. Just in case there’s a visitor …

Jeff and I went to high school together but we weren’t quite “high school sweethearts.” In fact the only reason we really met was because I went to prom with Jeff’s best friend. After we graduated, our groups of friends merged and I began to get to know Jeff.

He was wild. Not like party-animal-wild. More like too much energy to keep inside. He was known for being like a ninja and upheld that reputation proudly.

Since there’s no picture from that pool party, this will have to suffice 😉

It wasn’t until a year later that I really noticed Jeff. I walked into a friend’s pool party, did a double take at the guy in the pool, and asked “Who’s that?” My friend responded “that’s Jeff Chun” (like duh can’t you tell?) Jeff had a new trendy haircut (no more bowl cut parted down the middle) and traded his glasses for contacts. Hello Jeff!

Ironically, it was that same party when Jeff first noticed me. I was wearing a red bikini. Needless to say, our relationship was built on important factors.

My goal for that summer of 2000 was to get Jeff to like me. We started officially dating just a week before we went back to college – different colleges, 3 hours away from each other. After dating Jeff for about two weeks (accomplishing my summer goal), I went to visit him at U of I and then broke up with him.

Then Jeff declared his love for me.

Thus setting the tone for the next eight years of our off and on. Yep, eight years. That wasn’t a typo. But it seems this post is long enough for now… Now Read Part 2. 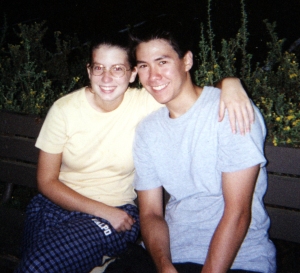 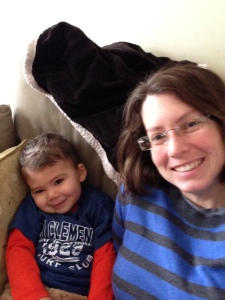 I’m sure a few old roommates of mine are nodding their head. Yep, that’s true.

It’s no secret that if sleeping were a super-power, I would be a super hero.

So when Jack – my precious, perfect, adorable son whom I love with all my heart and would do anything for (such as strict bedrest for four months) – when he wakes up in the middle of the night, I’m not so happy.

I recall times when my wonderful husband and I would take turns getting up with Jack. Then Jeff had a busy season at work and so I thought I’d be such a nice wife and handle Jack all on my own during the night. Eventually Jack started sleeping through the night again.

Just when my body adjusted to full nights of sleep, Jack started waking up again. He wasn’t sick or getting a tooth. He had no reason to be awake. And yet I hear “Mama mama mama mama mama” from the other room. Reluctantly, I pull myself out of the warm, cozy covers and hold a crying Jack.

After several nights of me consoling Jack back to sleep during the night, I was starting to feel like it was someone else’s turn. I nudged Jeff. Nothing. I elbowed him a few times in the back and said “I think it’s your turn.”

We proceeded to whisper-yell at each other. Are you familiar with this type of conversation? Jack was already crying, but with hopes of him going back to sleep without our intervention, Jeff and I whisper fought about who should get Jack.

Do you remember the days he could only say “Dada” and I still got him??

Eventually Jeff agreed to get Jack. Jeff returned 30 seconds later. “He won’t even let me pick him up. He saw me and buried himself in the corner of the crib and is crying for you.”

So the next morning at Bible study my prayer request wasn’t just that Jack would start sleeping through the night again, but that my attitude would be better. That I would be kind to Jeff and that I would be patient and loving with Jack.

Things didn’t change right away, but I noticed subtle differences that helped. When Jack would cry, I would hold him and pray out loud. It seemed that when I was praying Jack would be quiet. So I didn’t stop praying until I thought he was asleep and then I laid him down. Now that’s what I do: I pray for Jack. I thank God for him and all the fun things we did during the day. I pray for his future, that he would love God with all his heart, mind, soul, and strength. I pray that Jack would continue to be a blessing to those around him.

Now when I crawl back into bed after consoling Jack, I’m not regretting the bad words I said or thought. Instead I’m grateful for that time to pray for him. I feel peace and confidence that I’m doing what God wants.

I still don’t like when my sleep is disrupted. But I trust that God will give me the rest that I need and that the awake times He gives me are purposeful.