If we are friends on social media, you have problem seen pictures from our recent spring break vacation where we rented an RV and drove to South Dakota and Colorado to visit several National Parks. People keep asking questions and wanting to know more, so here’s a little update starting with what it was like to drive an RV.

First, driving an RV feels complicated… not so much the “driving” part but everything else you need to know about it. Our introduction to the RV by the owners took an hour. I still had questions but hoped Jeff was paying attention. Ours was 32 feet long and 11 feet tall, which meant we were too big to drive through some of the tunnels and mountainous roads near Mt Rushmore. Thankfully we knew this BEFORE we tried to drive there. Driving an RV takes focus and planning. It is a huge vehicle!

Second, driving an RV is slow… slower than cars or trucks. We had read online, and the owners recommended, that we stay around 60-65 miles per hour. Not a problem for the first hour that I was getting used to driving. But once I realized that we were going to barely – if at all – make it to my niece’s wedding (Stop #1), I started to push the speed. Driving to Wisconsin for my niece’s wedding was a normal drive that I’ve done hundreds of times. It usually takes around three hours – in a car. However, we left about 5 hours early just to be sure we had plenty of time to change into my dress and the guys’ suits when we got there.

We successfully made our first stop at a gas station and then grabbed McDonalds for lunch. Eating while driving seemed challenging, so I ate quickly and then hopped back in the driver’s seat. As we were getting closer, and the time of the wedding was approaching, Jeff decided he’d put his suit on so he was ready to help the boys. Thankfully we made it in time, parking in the street near the church. Driving on highways is no big deal. Driving through towns is much more challenging. You have to remember to take turns extra wide, watch the rear to not hit curbs, give other cars extra space, and hope that there’s somewhat of a decent place to park when you arrive.

After the wedding, we changed into comfortable clothes, put the boys to sleep in the bunk beds, and headed west. The plan was to drive until I was tired and then find a truck stop to sleep for a few hours. Jeff decided he’d try to sleep while I was driving so he would be able to sleep later. There was a bedroom in the back with a queen size bed, just past the boys’ bunk beds and the bathroom. In front of that was a small kitchen, table & benches where we ate meals, and opposite that was a couch. Of course above the “cab” (driver’s seat) was also a bed and tv which was a fun place to hang out.

Those first few hours of driving were difficult. It was dark, raining, sleeting, snowing, and icy. I made it about 4 hours before finding a truck stop in Minnesota to park and sleep. We parked from 12:30am to 3:30am when Jeff got up and drove us into Sioux Falls, South Dakota. Sleeping while the RV was moving was challenging. It wasn’t quite the same as the movement that puts babies to sleep in cars. More like trying to sleep through an earthquake and feeling like you’re going to fall out of bed. In fact, after that first night, neither child wanted to sleep in the top bunk if the RV was moving. I woke up at 7:30 in South Dakota and took over the driving while Jeff slept. After hours and hours of flat South Dakota, we finally arrived at the Badlands National Park.

What were the boys – ages 8 and 5 – doing during this time? Mostly watching movies and playing games on their Kindle Fires. They are good travelers and didn’t mind all the hours driving. It was definitely more fun in an RV!

More to come! Next up: exploring the Badlands, Mt. Rushmore, Wind Cave, The Mammoth Site, Custer State Park, climbing a mountain, and Garden of the Gods.

Just an ordinary Saturday for us… Jack has been very attached to his sleepers lately and refusing to get dressed. But this morning he was fine … onesie undershirt, jeans… then he seemed to realize what was happening and the tears and kicks began. So I added the sleeper and he walked around like this for awhile. Maybe it’ll be a new trend amongst toddlers.

After breakfast and a few Cat in the Hats, Jack explored Daddy’s

closet and prepared for battle. He did this all by himself. I am part Norwegian so I suppose Jack is just acting like his Viking ancestors. (Jeff was also a “Viking” because it was his middle school’s mascot. Go Vikings.) 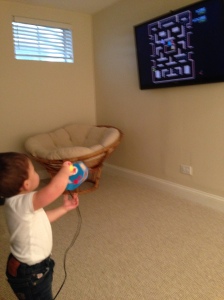 Jack has been sick this week and although he seems better every day, I figured we should probably just stay home and play around the house. Jack found this old Pac-Man game you hook to the tv, which was actually my roommate’s about nine years ago! So for the first time in nine years, we hooked it up and introduced Jack to Pac-Man. The entertainment only lasted a few minutes. Daddy would have been happy to keep playing but Jack pulled him away. 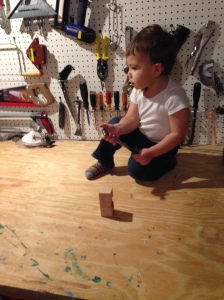 One of Jack’s favorite things to do is climb onto Daddy’s workbench and play with tools. I am usually not around for this, as I would probably be hesitant to approve such *dangerous* activities. But I held my tongue today and watched Jack have fun hammering nails, pulling wrenches off the wall, and listening to noises. He even grabbed some sand paper and started sanding a wood block. He only saw Jeff to do that once. What a smart tool-boy! 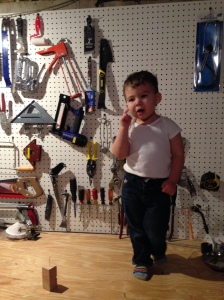 Just another Saturday morning at the Chun house! We hope your weekend is off to a great start!

With every diaper box I put in the recycling, I think to myself “there must be something cool I could make out of these boxes.” Usually the thought ends there. But thanks to Pinterest, I was able to get more ideas and pictures to follow. Let me welcome you to Chun Village. 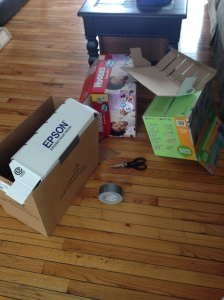 Here are the materials I used

Thanks to a Costco trip the day before, I picked up a few random boxes to use. Other than I used duct tape, scissors, and a leftover roll of blue tablecloth from Jack’s 1st birthday. 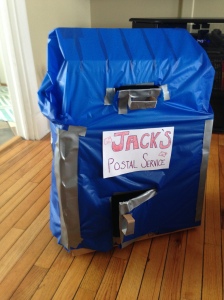 Second, a Gas Station: I found an empty spray bottle and random unused hose part around the house. The sign is actually hand drawn with crayons and markers. I know it looks so real you probably thought I printed it from the internet, which I would have done if my printer was working, but since it’s not, Jack gets some real artwork. 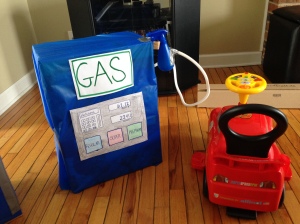 A couple of boxes and duct tape, a long afternoon nap from Jack, and we have some new toys to play with. Bring your toy cars over for a fill up and your toy letters to the post office! 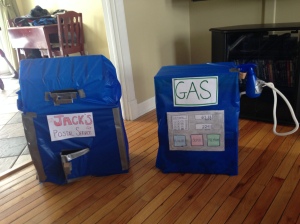 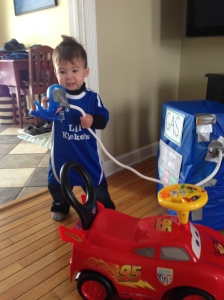 Here’s a good example of Jack’s poof of hair sticking up before his Haircut by Daddy. 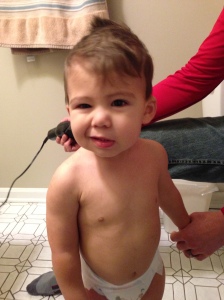 Jack had his first hair cut by Daddy this weekend. Jeff has cut his own hair for years and he does a good job. It’s really just a buzz cut with different lengths on the top and the sides. Jeff’s hair grows so fast, he cuts it every two weeks. 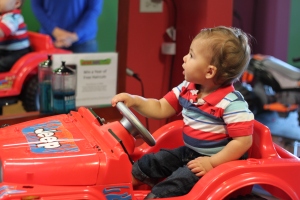 Jack’s hair isn’t quite like his Daddy’s, although it still grows fast. Every month I spend $20 taking Jack to a fancy, over-priced, kid-specialized salon. He sits on a little motorcycle, watches the movie Cars, and cries for most of the 10 minutes it takes the hair stylist to cut his hair. For awhile Jeff and I were thinking Jeff should cut Jack’s hair. I made Jeff attend Jack’s last haircut so he could learn how the experts do it. 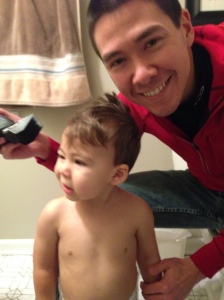 After two days of Jack’s poof sticking straight up, Jeff said “Jack do you want Daddy to cut your hair?” Jack was very excited about this, even though he seems to hate getting his hair cut. We discussed briefly, then started to get ready. Jeff got the clippers, I started praying. Just kidding… kind of…

Jack did better than he has at any hair cut. Lots of hair fell to the ground. I had to remind Jeff that Jack isn’t joining the military, so he didn’t need to go so short. 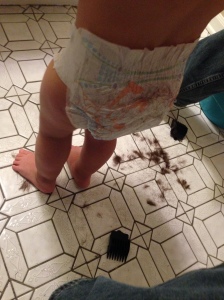 But in the end we saved money, had fun, Jack looks adorable, and I’m not even mad at Jeff! Success! 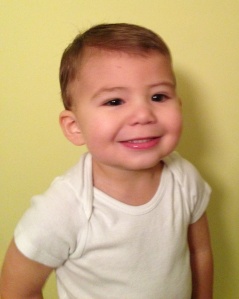 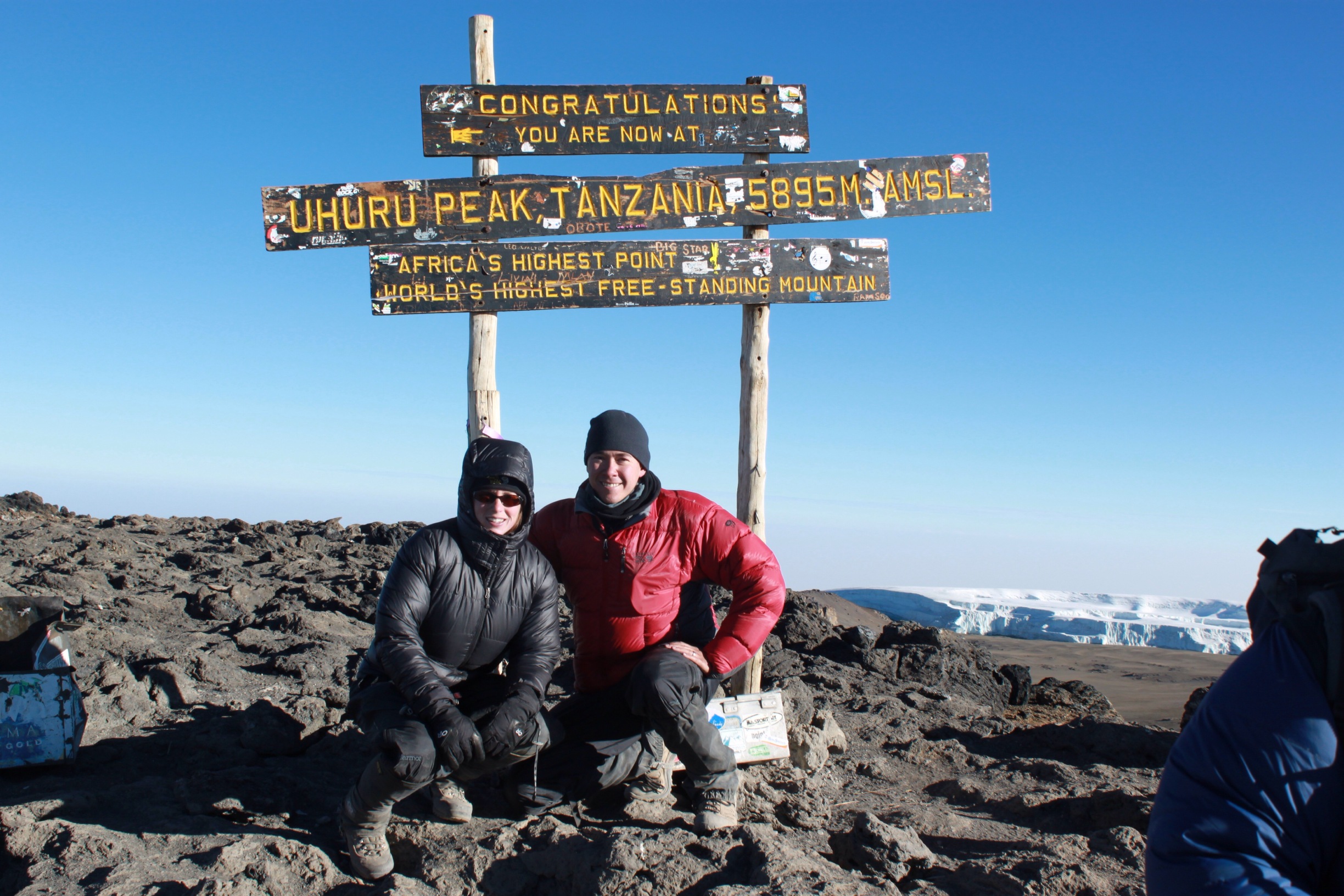